as i’m a sucker for a good sky shot, i forced myself up one morning while in florida to capture the sun coming around as the earth rotated.  as you might suspect, timing was of the essence. 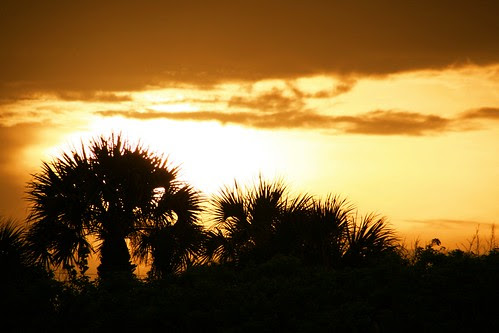 the next day i watched three imax movies.  the first called “magnificent desolation” was about the mission to the moon, what it was like, what it took.  it was amazing to see the history of what it took to get men there.  it was fascinating to see footage (in 3-d) of activities on the moon.  the movie also postulated what might happen if there had been problems on a moon mission.  intentions to return to the moon in the coming years was communicated as a goal that nasa has.

the second movie (”space station 3-d”) was about the construction of the international space station.  from the beginning pieces constructed to the second crew who lived on the station, we heard from the astronauts about their experiences of living on the space station.  the movie is not current as many more pieces have been added in the past ten years.

next, i got to experience what it was like to be in the shuttle on a launch.  with the absence of the g-forces, it was exactly like a launch.  well, no, i don’t know that for certain as i’ve never been in a real shuttle launch.  they rotate you until you are sitting on your back facing upwards.  when you launch, they simulate the shaking and rumbling of the cabin.  it was a fun experience, even the last bit that leaves you feeling weightless.

i also visited a museum of the early years of the work to achieve the goal of putting man on the moon.  the mercury and gemini programs were the testing grounds for the aapollo missions.  each mission was progress toward the ultimate goal of what the apollo 7 mission finally reached.

i walked through the rocket garden of the titan rockets.

the final imax movie i saw on imax was the latest star trek movie.  it seemed so appropriate to see that movie at ksc.  that was the best conclusion i could have to three days of a space related vacation this has been.
By mock - May 19, 2009

while in florida watching the shuttle atlantis head for the hubble telescope, i was able to visit kennedy space center and tour some of the complex close up.  i saw the vab (vehicular assembly building) where they now prep the orbiter for missions.  it once was used to prep the apollo crafts for the moon missions. 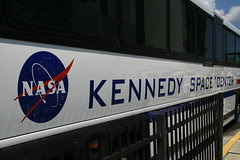 the tour also took us out to view launch pad 39A, from where atlantis launched just the day before.  in the distance, you could see the shuttle endeavour sitting on pad 39B ready for a rescue mission if necessary.  the reason for the rescue contingent is that the hubble is in a higher and different orbit than the iss.  were a problem to arise, there wouldn’t be enough resources for the iss to be a rescue option.

we saw the landing strip, which is so long you cannot stand on one end and see the other end as it follows the curvature of the earth.

as part of the tour, we were dropped off at the apollo/saturn v center where the history of the apollo and gemini missions were explained.  we saw the mission room including the actual equipment as it was when they originally used.  a replica of the apollo vehicle which is the saturn 5 rockets, the lunar and command modules, and all parts in between.  each portion of the apollo system and mission was detailed.

another stop on this tour included information about the international space station.  we walked through portions of the modules and visited the ready room where new modules being sent to the iss are tested for compatability and assembled for delivery.  we saw some of the japanese engineers who were getting ready to leave after delivering their next installment for the iss.  we also saw them testing and setting up another module for a future addition to the space station.
By mock - May 18, 2009

launching of atlantis for sts-125 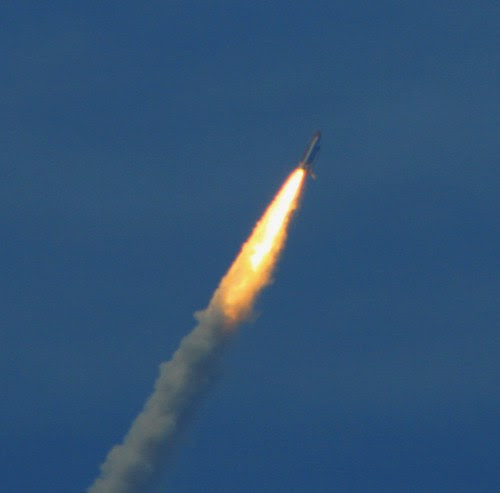 i finally got to see the launch of a space shuttle.  this was originally the trip i wanted to take back at the end of 2008.  but a malfunction with the hubble in late september caused the october launch to be postponed to this past week.  according to the tour guide, there were two parts to the hubble, a primary and a back up.  the primary failed passing control to the back up.  since they had not yet made the trip for the maintenance, this opportunity gave them the chance to fix the failure and perform the upgrades.

along with a friend and her parents, we camped out on side of SR-528 about a mile from the banana river drive exit about three and a half hours to get a good spot, which we did.  we realized we had a clear view of endeavour while atlantis was hidden behind some trees on a small island.  (i shifted my location to get some pictures of the initial srb ignition.)  i was still quite a ways away to get some very detailed shots.

i found out while on the tours of kennedy that i could have purchased tickets for the launch which would have put me significantly closer.  if i decide to attend another launch, i will indeed purchase those tickets.

of course, the time it takes to leave the pad to reach orbit is just around two minutes (two incredible minutes), the launch was over very quickly.  two hundred and twenty hours for two minutes worth of watching.  yes, it was worth it.

i recorded the launch on my tivo covered by one of my high def channels.  not only did i get to be there to see the launch in person, i got to see all the close up shot provided by nasa in high definition awesomeness.  the only way to beat that is to actually be either in the launch control room or on the shuttle itself.
By mock - May 17, 2009