i have to admit that i have a real dislike/never-use-again mentality for at&t. but this has bought them a little bit of respect from me. don’t get me wrong. i’m still never going to use them again, but i will admire them from my reliable internet connections way over here.
By mock - February 27, 2010

as i posted earlier, i made the trip to florida to watch the last night launch of the space shuttles.  i caught up with some cousins who were also in florida for the same reason.  i had been corresponding with lowell, who is actually mom’s cousin, regarding the launches.  he’s seen a few more of these, and i had asked his advice on best places to stay and where to witness the launch when i made my first trip last year.  this time, i finally got to meet them all in person.

we had lunch at this little place off highway 520.  we all had something fried.  they had some shrimp.  i had some gator.  pictured are lowell, alice, jill, and me waiting for the fried goodness to arrive.  this was our first time getting together after they delayed the sunday morning launch.

we met up again on monday after they finally got the fuse lit on endeavour.  we were much more tired the second time around after being up for two nights and not getting all the sleep we needed in between.  nevertheless, it was good to hang out with family.  lowell, alice, and i took a drive down florida 1A1 (atlantic avenue) from cocoa beach past patrick air force base and into a bit of satellite beach.  lowell pointed out what was around back in days of nasa when the moon landing was still the goal.  many of the places he showed me i’ve been reading about in the right stuff.  as with all beach locations, it has been built up much more than it was when alan shepherd and john glenn were being jettisoned into space on rockets.

i’ve uploaded a few photos of the launch that morning to my flickr account tagged “sts-130.” the video turned out the best on my attempts to capture the launch, but those are what i have.  of course, nasa has the best pics in the world for these things.  incredible angles of the launch.  nasa’s collection of photos of the launch, which again doesn’t do the actual site justice. i credit nasa with this image of the launch which the closest i could find to how it actually looked if you had been there.  it comes from nasa’s site, but i couldn’t seem to locate it again for a link.
By mock - February 24, 2010

android update for the moment

i have been running the update to cupcake (CL14) for a few weeks now. i have to say the two most noticeable improvements are correct battery life status and gps glitches removed.

the bigger of the two problems was my battery life. it showed significant drains after half a day of average use. patch now shows accurate power level which means my phone won’t shut down with a half loaded battery.

other people made references to the gps eating up battery cycles, and i’d noticed it appearing to struggle to get a signal whenever i had it active. now, it doesn’t continuously probe for satellite signals anymore and seems to pinpoint my location promptly.

the battery fix is why i upgraded and has made my experience with the moment so much better. and i was hoping this patch added over the air (ota) abilities for future upgrades.  brighthand posts that if i want to get upgraded early, i can take it into the store.  ota upgrades will come a couple of weeks later.  if i can get the upgrade this coming week, i’d spend some time in the sprint store.
By mock - February 18, 2010

i decided to do a little advertising of my favorite linux distro.  so, i ordered a skin from skinit.com.  the image is from fedora user and graphic designer ian weller. 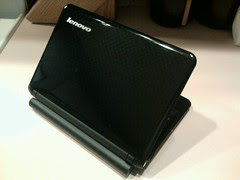 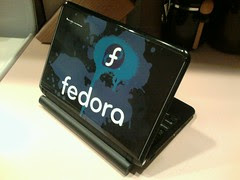 last night launch of the shuttles

an era has ended. the last of the night launches occurred with the endeavour and its sts-130 mission. if congress approves the president’s proposed budget, manned space flight will pretty much be a done deal when the shuttles retire in may.

this launch was heavily attended as it is the final night launch. and the final shuttle launch in may will also likely have a record nunber of witnesses. (i can’t imagine the traffic for that crowd.) the astronaut hall of fame was filled up early on sunday morning only to have the launch scrubbed. they honored the tickets purchased for the next morning’s launch, but we got “upgraded” to watch the launch at kennedy space center (ksc). that’s a closer spot than the hall of fame!

i surmise many who attended last night wouldn’t make it the monday morning as many have work and school on monday. but being back at ksc was definitely exciting! i had considered visiting on monday before they rescheduled the launch. it was also rare to see ksc after dark. the mirror memorial was lit up like you can only see at night.  the whole complex was up and running as if it were a normal day.

about an hour before t-zero, i set up my tripod near the shuttle simulation building.  many had camped out spaces in that area already.  more probably would have if it weren’t so cold outside.  there were cautionary conditions again monday morning as we had on sunday morning, but things cleared up enough to move things ahead.

nothing beats the spectacular scene of a night launch! it was definitely worth the trip!  i captured the launch on video however i must state that this presentation pales in comparison to seeing the sky as bright as day when it took off.  it was like daylight, like watching the sun rise very quickly.  truly amazing!