i have a indifferent/hate relationship with twitter.  while it has suffered from the inability to handle scaling back when it first was launched to its infrequent outages to date, there is a bit more stability, and i don’t hate it as much as i once had.  in fact, i’ve been using it about as much as facebook in terms of posting my activities rather than updating my fb status.

my geeked interest in space/nasa has been hightened lately by the past several shuttle launches (and nasa tv) which provides great coverage of the launches, landings, and missions including activity on the international space station.  no news agency has better footage of the inner workings of nasa.

now, news from space can be feed directly to anyone subscribing to mike massimino’s twitter account.  in this computerworld article,astro_mike will be sharing his activities while on mission for hubble maintenance/upgrades.  he only has 64 tweets under his belt yet over 140,000 followers.  that’s a heck of a lot.  this twitter experiment/experience will be nice added coverage to the nasa tv coverage.  it also means that if you can’t stream the video, you can at least keep up with the mini-messages from time to time.

when the bacon explosion first was seen on nytimes.com, i received countless pings to the link from everyone i knew.  (it was more like a blitz.)  i knew when i first saw it that one day i would have to try this wonderful recipe.  and last evening, that day arrived.

i used the recipe found at bbqaddicts.com for this endeavor.  as the author of this recipe is a barbecue connoisseur, he chose a barbecue rub for his weave.  i received a coffee rub from a pal of mine for my birthday which i thought would be perfect for bacon.  i chose jimmy dean sausage, a pound of regular and a pound of hot, for my loaf ingredients.  and the bacon…i don’t recall the brand, perhaps thomas.  it was a good quality bacon, needless to say.  my cooking time was about two hours, although another 30 minutes would have made it better.

everyone who tried it seemed to like it.  even pat was on board with a helping (or two).  since pictures are worth a bunch of words, click image for slideshow. 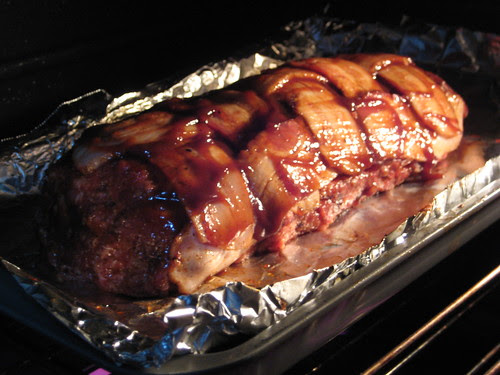 my professed love for bacon was embelished this year as i received gifts for my birthday with the outstanding theme.  among the many items given were:  bacon jelly beans, bacon t-shirts, bacon toothpicks, bacon air freshener (for the car), bacon gumballs, a bacon cookbook, home made bacon candles, and a bacon pillow.  my sister even made a bacon breakfast casserole which i took to work today and shared with my fellow geeks.  (bacon is worth sharing…when you have enough.)  it was truly a good birthday! 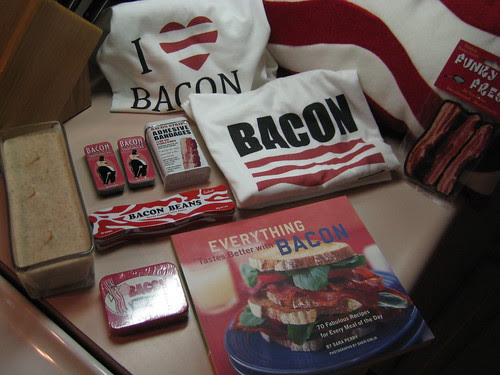 in 2007, i had a physical for a driver’s license requirement.  my physician looked at my stats and made a comment about my weight not being in the right range for my height class.  when i told him i was regularly exercising, he wanted to check the pending blood work before finalizing his statements.  he did clear me, but that thought lingered.

at the beginning of 2008, i decided that getting in shape was a little more than just  exercising alone.  i am not one for diets or crashing my system to get to a goal.  in my personal experience, quick to go, quick to come back.  i started to make small adjustments to my regular eating, primarily focusing on how much protein i ate and how much per meal i was downloading into my belly.  it was a slow process.

i had made some soft goals to try to be at certain weights throughout the year.  little by little, i would get down to my three or five pound goals.  it fluctuated frequently and sometimes i would end up way above the upper limits i was resetting for myself.  (i thought i would put on weight going to greece last summer because they feed us very well, but i was shocked to see that i weighed less when i returned.)

in celebration for my birthday, i took this friday off.  i drove down early in the afternoon to old navy and looked for a pair of 36×32 jeans.  i found a pair.  i tried them on.  they fit comfortably with room.  i have actually returned to the waist size i was in college.

i have not yet reached the low number which i will consider my “normal” weight.  i believe the height-weight chart has me around 180 lbs for my height.  i think if i can reach 190 lbs and have the extra bit in muscle, i will be satisfied.  (my low point right now is 198.5 lbs.)  this is still a gradual process, so i don’t expect to his this goal until late in this year.